Something we (Jake) have been promising for a while is an overview of our statistics after each basho. We put a bit of effort into running fantasy sumo contests and our Elo-style power rankings, so we wanted to make sure the final results were available more than just on our regular episodes. Check out our results below and let us know what you think. We’re always looking for more ways to over-analyze and quantify this beautiful sport of ours.

Every basho we run a fantasy sumo contest for bragging rights. Check out our Twitter feed for the contest to join us next basho. Here are the rules we use for scoring:

Our fantasy guest this basho was @ourmaninjapan, who won his place by coming up with some great sumo/music puns in our Twitter contest. In a move rivaling the nerdiness of GSB ourselves, he used an algorithm and a spreadsheet to determine how many wins he expected from each wrestler. Here is his team, anchored by the only active yokozuna, Kakuryu:

Next up we have Flyric who has been on a cold streak, losing 2 of the last three basho. Did he turn it around this time?

He did not. Rough call on that Takakeisho pick. Next up was Mak coming in with a strong looking team on paper:

A few guys out of their depth kept Mak from pulling ahead. Jake picked with his heart instead of his head but managed to do OK…

But far and away our winner was Ryan. His picks did well so consistently he would have almost won even without the yusho winner.

Here’s a final look at scores, with Ryan crushing us something fierce and our guest holding his own. Well done and good game, @ourmaninjapan.

Another of our side projects is our GSB Power Rankings. Borrowing from professional chess’s Elo rankings, we assign each wrestler in the top division a rating, defining 1000 as the (unitless) average. By comparing the rating of each wrestler, we can estimate the probability of victory for each match and reassign points according to the result. If the result was expected, such as Hakuho defeating Tochiozan, then only a few points will be taken from the loser’s rating and given to the winner’s. In contrast, a big upset will cause a bigger point-swing. By following this process over all 15 days of the basho, we can visualize how the wrestlers compare to each other in regards to their current momentum. Here’s a graph of some of the top guys in Natsu: 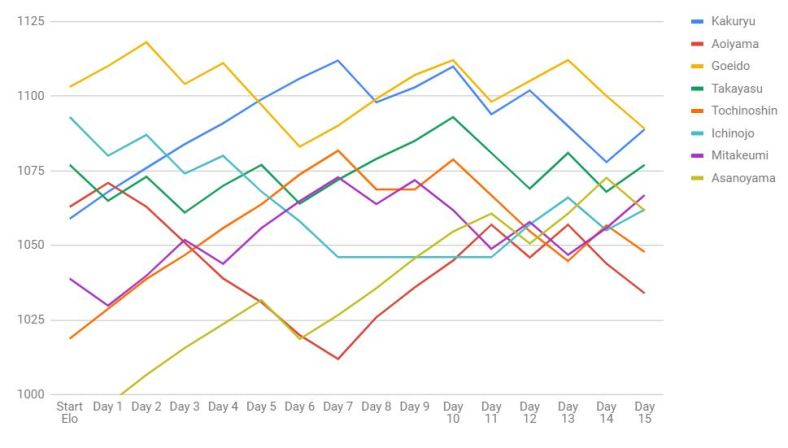 Check out Asanoyama barging into the pack of elite talents at the top. You can see a better view with all the numbers by going to the Google doc linked above. On that document you can change any of the blue cells to compare whichever makuuchi wrestlers you like.

Well that’s all for now, feel free to send us any questions or suggestions and we’ll see you after Nagoya with more pointless stats!

Check your favorite podcast app for monthly breakdown episodes: a preview episode before each basho and a recap episode after. Also keep an eye out for special episodes featuring topics ranging from sumo history to spotlights on famous rikishi. Feel free to send us any comments, questions, or corrections.